The standard “Tee” mooring gripper system was originally developed by CRANDALL DRY DOCK in the 1970s and has since been a main stay in the floating dry dock industry. The system is typically a 3-point type mooring system with two of the mooring points orientated to be perpendicular to the dock for resisting broadside loads and the third mooring point being orientated at 45 degrees and designed to resist loads applied longitudinally to the dock. Each mooring point consists of a gripper jaw mounted to the pier and a Tee spud, welded to the side shell of the dock.

The gripper jaw, which wraps around the vertical mooring spud, is outfitted with a 3D spherical bearing which gives the mooring system the ability to accommodate a wide range of dock trims and lists, without binding. The spud itself, is required to be greased along the length, to minimize the effects of friction as the dock moves vertically relative to the pier during tidal cycles or submergence evolutions. The jaw itself is outfitted with sacrificial bearing pads, of a soft metal material, that can be replaced as needed over the life of the structure.

The mooring points are designed in a way such that the force through the gripper arm is purely axial load (either tension or compression). As such, this type of mooring system is preferred when high seismic displacements and loadings are expected. In this scenario, the pier anchorage bolts are typically outfitted with properly engineered seismic fuse nuts, which are designed to fail in a loading condition that notably exceeds the wind demand, to limit the amount of load transmitted through the arm. This methodology protects the dock and pier from overload and potential damages. A secondary system is required to hold the dock in place in the event the seismic nuts fail.

The jaw is structurally engineered to handle a very highly concentrated loads and HEGER’s ability to model these structures in Finite Element Analysis (FEA) programing ensures the structures have sufficient capacity to withstand the expected loadings: 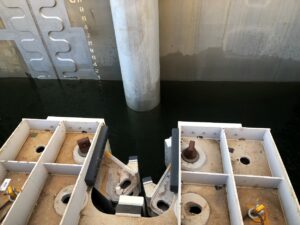 Quick-Disconnect Type Mooring
This website uses cookies to improve your experience. If you continue to use this site, you agree with it.